Not a long time ago, they asked me what I thought it was the most underrated photography accessory. I didn’t really hesitate: tripod heads.

Maybe due to the multitude of models on the market, maybe for the prices sometimes unnecessarily high, you pretty often find yourself choosing heads-included tripods, convincing yourself that if the two products (head and tripod) have been put together, so that’s the best pair for us too.

I’m definitely against this philosophy, and that’s why, during last years, I’ve tried many heads of several brands and types, searching for the holy grail: the perfect head.

As a landscape photographer, since I was younger I’ve hated ball heads, defining them not accurate and not safe. So, over time, I’ve tried several alternative solutions, finally choosing to use geared heads, since they’re very accurate in composition phase.

Unfortunately, about one year ago I realized there was a paradox: the tripod head weighted more than the tripod itself. So, I started my research again, hoping during those years there had been some kind of technology evolution.

Thanks to a cooperation with different companies of the industry, I had the opportunity to try several products and prototypes, but unfortunately, I didn’t get to find what I was looking for.

But you know, life loves to amaze us, and so, due to an incredible series of coincidences, I found in my hands my old hatred: a ball head.

“Just try this, then we discuss about it” they told me.

So I bought it, and my adventure with the Manfrotto XPRO ball head begins.

The hatred for ball heads

As I said already, the main reason I’ve soon hated ball heads is that the ones I could try always revealed themselves as a disaster. Basically, their black mark has always been that once the locking mechanism gets loosened, the camera can move without any constraint.

On one side, this doesn’t allow to make accurate adjustment in terms of composition (fundamental for a landscape photographer), and on the other side (even worse) if you don’t hold the camera firmly when you release it, it will tend to fall down, with disastrous consequences if you’re using photo filters on the lens.

Over time, and on the more professional models, the so-called friction has been introduced: basically, there’s an adjustable mechanism to leave some resistance left to the sphere, so that when we loosen it, it can be moved without falling down with the camera attached.

Even if this mechanism is as brilliant as banal, unfortunately, its application has often been unsuccessful. In some heads models I’ve tried, the friction adjustment was approximate and unstable (on every photography outing I had to calibrate it again), while with other models its bad position made it exposed to accidental damages, like impacts.

So, is there any reason why I should try the Manfrotto XPRO on the field? 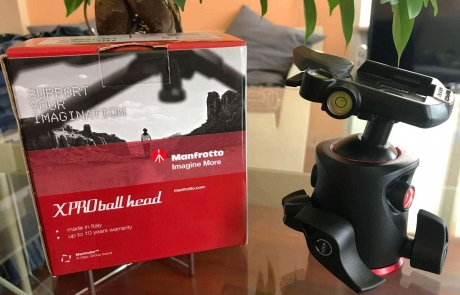 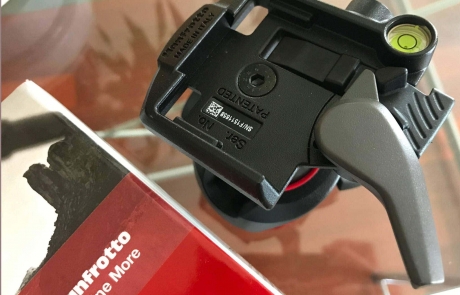 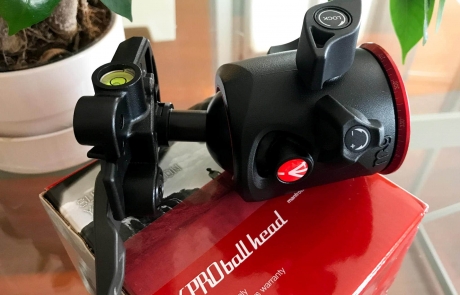 It’s maybe because Manfrotto is an Italian company, but we must acknowledge one thing, without any test: the products are beautiful. And the XPRO head is not different in that, and you can notice the care for the product even from the box.

Once you hold it in your hands, then, you can see really nice aesthetic finishes with a rounded profile. Also, it gives an immediate feeling of firmness. But let’s check its main feature together:

The first thing to catch my eye is obviously its weight. 500 grams are absolutely nothing, especially compared with the popular and beloved 3-way head 804rc by Manfrotto of 750 grams or my favorite geared head 410j with 1,2 kg.

Surely, on this aspect, the choice of the materials has been great, and so is the design of the minimal yet sturdy structure. Despite its lightweight, the 10 kg payload is absolutely higher than the necessity of mine (and probably of yours too).

The 3/8” attach makes it compatible with the 99,99% of the tripods available on the planet, therefore the answer to your question is yes, you can use this head on non-Manfrotto tripods (as I did throughout this test).

The XPRO by Manfrotto is available in two models, different in terms of attach:

Year after year I got to love Arca Swiss, because it became a sort of standard among producers, allowing the maximum compatibility between the different brands. Nevertheless, I’ve chosen the version featuring the Quick Release 200PL plate, basically for two reasons:

About the first point, I must admit that the attach solution that made Manfrotto’s head so popular is really brilliant: thanks to a handy and very quick mechanism, the plate gets inserted on the head, and to unlock it you need to push a release lever, specifically designed to avoid an accidental unlock.

With the Arca Swiss system, instead, you need to turn a knob to activate a vise that, in its turn, hold the plate in position: besides the fact that it takes too long, just one moment of distraction and the plate won’t unlock correctly and leave the camera fall down.

If about this point it’s just personal “taste”, on the second one I think things could be better: the provided plate is completely smooth, therefore once mounted the camera on it, it will tend to unscrew and rotate, the more when we’ll be in cold and wet conditions. The solution would be really simple: just apply the same rubber layer of the Quick Release plates. I’m sure sooner or later Manfrotto will improve this too.

Then, on the head there are two small bubbles: I think they’re always something pretty useful, because as is known, latest camera models’ digital bubbles are not really accurate at all, while the good old gravity is always right.

By looking at the head’s body, we can notice two leverages: the first, main one, allows the ball’s release: once released, the maneuverability is really great both on horizontal and vertical axis, being able to reach a tilt on them from -90° to +40°. The second one, allows the panoramic 360° rotation. Honestly, I don’t think a ball head would be the right choice for panoramic shots (intended as a combination of multiple shots), but it’s surely a feature that gets pretty useful to us to adjust the head once the tripod is set up: you better always have the main ball unlocking system on the “strong hand” side (so the right one, unless you’re left-handed).

Last but not least, the friction control. My skepticism gets immediately turned off: the adjustment, by turning towards right and left respectively to increase and decrease the residual unlocked ball grip, is well placed next to the main unlock knob of the ball. Since it’s smaller, then, it is protected and it is really unlikely to accidentally enable or hit it.

The adjustment is amazing: it’s not about a simple screw that will never keep its position, but it has a snap mechanism that not only makes the adjustment simple and accurate but also particularly safe.

By now you know it: the more a product looks great on my desk, the worse I’ll treat it on the field. Let’s start, then, with the freezer test, by leaving the XPRO Head by Manfrotto inside it with my Vodka, for 24 hours.

My main doubt is the combined use of aluminum and magnesium and their behavior at low temperatures. Fortunately, every concern is really unfounded, and the ball head works perfectly even when frozen: the levers get smoothly unlocked, and the ball rotation has never gotten obstructed or slowed down.

This, of course, thanks to the ball locking system used and the ball’s body inside geometry, that allow the ball itself not to be affected or obstructed by differential dilatations of the different materials, due to the temperature variations. Probably, I will never push it to the stated limit of -30°C, but I can’t really doubt its correct operation.

The actual on-field test has been carried out in a particular location: Iceland. Cold weather, wind, sand and ice (pretty often combined each other) have been constant companions during each shot, but the XPRO never showed any sign of collapse: always smooth and fluid movements.

The friction works as I hoped: once set up, it never loses its position, and even if we accidentally change its settings by rotating the control knob, the step is very short, therefore there won’t be any risk of decreasing (or increasing) the tension. Thanks to a properly adjusted friction, improving the composition, even by very few degrees, through the main unlock knob has never been a problem.

The Quick Release system confirms itself a winning choice: even using some thick gloves, safely attaching and detaching the camera from the ball has always been easy. I love, in particular, the safety feeling the balls gives me when attaching it when the auditory feedback (the “click” once the plate is inserted) doesn’t leave any doubt.

The panoramic rotation and ball unlocking knobs are practical and ergonomic too: both with gloves on and in the dark, it’s always easy to find the right knob, thanks to their different size.

Finally, as I said, the test has been carried out on a non-Manfrotto tripod: needless to say, the threaded universal attach of 3/8 inch made everything easier. 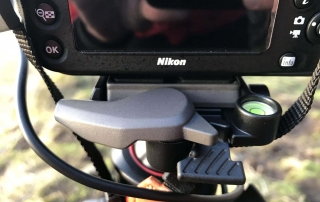 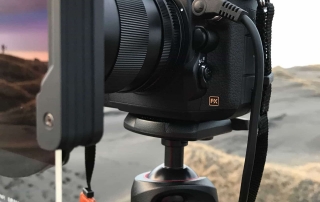 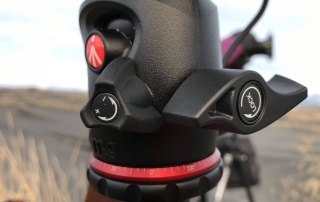 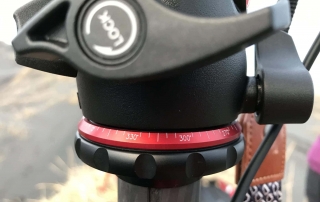 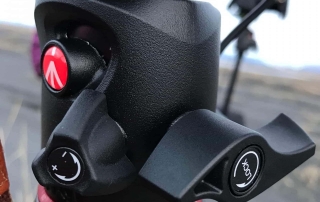 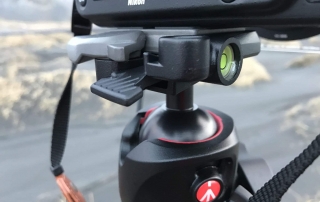 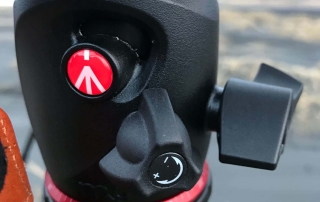 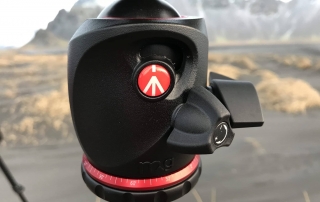 I must admit that this XPRO ball head by Manfrotto has impressed me from every point of view: nice design, top quality materials, accurate and safe.

The friction is its real strong point: perfectly designed, amazingly implemented. By properly setting it up I’ve always been able to make micro-angle adjustments over the composition, without needing the precision of a geared head.

The locking Quick Release system by Manfrotto reveals itself as a really right choice, and its irrelevant weight (500 grams only) allows you to carry the tripod on your shoulders without feeling like in a medieval torture.

The price is really restrained for such a professional product, and as an absolute hater of ball heads, I can’t find a single reason not to use it for the landscape photography.